September is National Sewing Month! How do you sew?

September is National Sewing Month is presented by the Sewing & Craft Alliance with participation from the American Sewing Guild.

See the themes of past National Sewing Month celebrations.

On September 21, 1982, at the request of the American Home Sewing & Craft Association, an industry and trade association supporting the sewing and craft industries, President Ronald Reagan, under Proclamation #4976, declared September as National Sewing Month “In recognition of the importance of home sewing to our Nation.”

Subsequent Proclamations naming September as National Sewing Month were issued by President Reagan in 1983 (#5106), 1984 (#5233), 1985 (#5368) and again in 1988 (#5867). The Proclamations state that “Tens of millions of Americans sew at home. Their efforts demonstrate the industry, the skill and the self-reliance which are so characteristic of this Nation.”  Full documentation of the Proclamations can be found on the American Presidency Project website at http://www.presidency.ucsb.edu

Unfortunately, we have no records of how National Sewing Month was celebrated in those early years and few references exist on any specific outreach, activities or advertising.

In the summer of 2004, the Home Sewing Association (HSA) (formerly the American Home Sewing & Craft Association) renewed its dedication to National Sewing Month and commissioned a new logo, shown here.

In May of 2005, HSA submitted a proposal to the Office of Proclamations asking for a revival of National Sewing Month under Proclamation #5368. The letter stated that “The revival and recognition of September as National Sewing Month gives the industry an annual celebrated boost to all those associated in the business of home sewing. The re-declaration of this proclamation will aid in promoting and energizing commerce, re-inspiring consumers and introducing sewing to new demographics.”

On July 20, 2005, Marguerite A. Murer, Special Assistant to the President and Director of Presidential Correspondence sent a note of regret that the request could not be accommodated.

HSA’s management understood that a new Proclamation was not a requirement to promote September as National Sewing Month and a full advertising campaign was launched, including press releases, ads, flyers, web banners and a digitized logo available for free download from the www.sewing.org website. The theme for 2005 was “Sewing… the alternative yoga” after earlier studies had shown that sewing reduced stress in adults and gave kids a creative edge. The campaign was a huge success and included participation of local and national retailers, American Sewing Guild (ASG) chapters, sewing educators, online retailers, school systems and more.

The success of the 2005 campaign continued in to 2006 with a theme of “Sewing… Express Your Creative Spirit” with a call to action — “As a form of self-expression, sewing is fun, fashionable and rewarding. Create your own signature style!” The theme for 2007 was “Sewing…it’s what you make of it” and continued to garner the support of retailers, ASG chapters, educators and more.

In December of 2007, the Home Sewing Association closed its doors.

A new www.NationalSewingMonth.org website launched on April 20, 2008 with a newly designed logo and a theme of Go Green! Sew Green!, which reflects the changing way we see our environment and the knowledge that we can make a difference, even with our sewing projects, without sacrificing comfort or style.

For the first time, National Sewing Month featured a project, the Anti-Ouch Pouch, which is a wedge-shaped pillow designed for women to ease the painful area under the arm after a mastectomy. Developed by Deon Maas, an ASG member and Sew News contributor, the Anti-Ouch Pouch was ASG’s 2008 National Service Project. 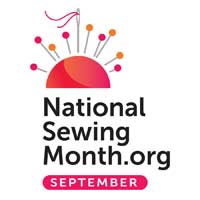 By late 2019, a resurgence in sewing had begun as fast fashion was being eschewed for the quality and creativity that can be obtained by taking needle and thread to fabric. By creating something uniquely one’s own, sewists are once again achieving a trademark look, a perfect fit and clothing that wears well and look outstanding. And once again, a renewed interest in sewing is crossing generations.

National Sewing Month 2020 kicked off with a new logo and a theme that expresses that burst of pride and joy that sewists experience when the last thread is cut on a finished project ─ I create with fabric and thread. What’s your Superpower?

September is a time to celebrate our passion with National Sewing Month, but we know the creative benefits of sewing are joys that we can celebrate throughout the entire year.

We provide free promotional materials to use the materials to promote National Sewing Month. Your support of our efforts is not required but would be deeply appreciated.

National Sewing Month is presented by the Sewing & Craft Alliance with participation from the American Sewing Guild. ASG is a national membership organization that supports sewing through meetings, education, resources and an annual conference.